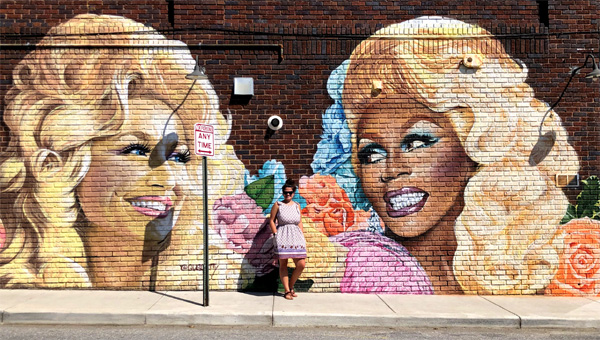 Dolly Mural   Our Dolly Parton mural was collaborated by Owner/Beauty Operator Terra Marshall of Beauty Parade Salon and mural artist Gus Cutty. Terra has been a local business owner in West Asheville since 2003. Gus is an amazing talented and made our mural one of Asheville's most famous. He has several more murals throughout our beautiful city. Come see us and get a pic with our Dolly!

Dolly Mural Update 04-04-21 The Dolly Parton mural on Haywood Road near Beauty Parade Hair Salon now has a new addition. There's a new face now greeting visitors in West Asheville. The face of famous drag queen and television star RuPaul has been added to the side of the building.
Mural Location: 783 Haywood Rd

Biography below is written by Gus Cutty himself:
To earn our kindergarten graduation in the 80's we were to participate in The ABC Circus. We chose sideshows from a hat. Some were strongmen, ripping precut telephone books slightly in half, others red nosed clowns, me, I chose break dancing bear. A local Nashville boy crew came to our school and attempted to teach a team of tiny children to do moves like the worm, a simple 5 step and the robot before a short demonstration of power moves. Hypnotized by spinning adidas suits, the brain washing was effective. In the 7th grade I met a mutual friend who had heard of me but thought that I was a polish kid at our school with the same name. In classic elementary single line fashion, I began writing my first tag, Pollak.

Tower Records and Books were located on the opposite side of Vanderbilt University from my house so, between smoking weed and eating Vivarin, we taught ourselves to rack. A classic move was removing the alarm tag and sticking it to a strangers jacket or dropping it in their purse, casually strolling out, pants full of Mobb Deep tapes and Can Control magazines, while loss prevention shook down the confused mark. Exiting the school bus, you would climb 3 or 4 levels of long concrete steps to enter Hillsboro High School. One monday morning the kids erupted in cheer as we arrived to ALARM written in red and black spray paint repeatedly across the front of each step leading towards the towering clock surrounded by even more hand styles. Inspiration was easy, Sever, Beno, Revok, Tek, Skinz, Rex 2, Race and too many to name. GQUE was my favorite.

My roommate decided to flip his rent money with an ounce of weed which he was quickly relieved of in a parking deck stairwell by an old acquaintance. With none of our names on the lease and two days before the fifth, we recorded a song called Shady Bastard, detailing the affair. Paired with a couple more instrumentals and songs, we individually burned and printed covers for 100 copies of Rent Stik Volume 1 and headed downtown to try our hands at another hustle. We made rent.

I awoke to what I thought was the tv playing an episode of The Wire. The gunshot was real. Luckily my roommate was ok as his friendly golden retriever had attacked the guy being fatally wounded in the process. Duffel bag full of contraband, I still blame myself. A month later we all moved to San Francisco.

One year I canceled Xmas. With a sharpie I drew santa claus s head with a machete through it on a white tee with the words Xmas Is Cancelled on the back. Between each song our DJ Al Lover echoed the mantra through the building as I passed out copies of a zine I had drawn while injured on the couch for a week. On Xmas eve, shortly after midnight, two of our crewmates were arrested after attempting to save a female friend who was being attacked by a date. They spent the next few months in lockup. I'm more careful with my words now.

My friend Topr pressured me to help him paint a Game of Thrones mural after 6 years without a can. Turns out, just like riding a bike. That was in 2012, I haven t had a real job since.


comment by: Lois
Brilliant way to allow visitors to enjoy the sites and sounds that Asheville has to offer.