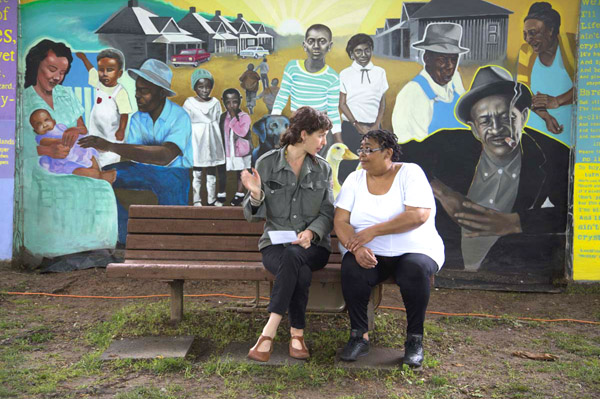 Triangle Park Mural, 2012-2013, Asheville, NC. 1300 sq feet, acrylic on concrete. The Mural was a collaboration between the Just Folks Organization, the Asheville Design Center (ADC), and artist/community-arts organizer Molly Must, who was supported by the VISTA/ Americorps program at ADC for 14 months. Planning for the mural began in 2011. The mural was completed in 2013. Funds for the project were primarily raised through a Kickstarter video and campaign.

The mural is a memorial to history. It celebrates the stories of Asheville's historic African-American business district and surrounding Valley Street/East-End neighborhoods. The mural spans the two sides of...
Triangle Park, at the intersection of Sycamore Alley and South Market Street in downtown Asheville, NC. This is the heart of "The Block," an historic area that remained the cultural and economic center for all of Western North Carolina's African-American citizens from the time of Reconstruction until the years of integration and "urban renewal." Triangle Park is a remnant of this era, where people who grew up around Valley Street still gather. In an upwelling of community effort and care, nearly 100 volunteers helped paint the mural, many of whom have their own stories about the heyday of the Block.

Beginning in the late 60s, Nearly 500 acres of majority black neighborhoods surrounding The Block were cleared in the East-Riverside Re-Development Project. This completely altered the physical, cultural, and economic landscape of the area. In these now-quiet streets there is little evidence of the Block's earlier chapter of African-American entrepreneurship & bustling community life. The mural aims to offer proof, emphasizing the idea that it's important to know where we've come from in order to see where we are, and where we're headed.

The design of the mural is a product of community discussion that was aided by historical archives, interviews, family stories, and donated photographs (including the collection of photographer Andrea Clark). The imagery of the mural pays tribute to the love, labor, and stories of the people of the Block, East End & Valley St neighborhoods, and also honors many of the historic institutions of the area including the Stevens Lee High School, Catholic Hill School, and the Young Men's Institute (YMI).

The mural was originally the first phase of a multi-phase vision for park beautification and grassroots community investment. We strongly believe the park holds more opportunity for continued collaboration between historians, artists, and community members, if support can be found.

During her VISTA tenure, Molly worked to incorporate art into the existing community development projects. The Triangle Park Mural Project became the focus of those efforts, and became a popular and engaging idea that many East-End and Southside residents came out to support, serving as a powerful bridge between the many different cultural networks. With all funding and in-kind donations, the mural represents over $60,000 of community investment in The Block.

Molly Must is an artist from Lobelia, West Virginia. Driven by a belief in the power of story-telling and cooperative creativity, she began making public murals and organizing community art projects in Asheville back in 2007. Between 2007 and 2015 Molly coordinated two major community murals in Asheville (the Lexington Avenue Gateway Mural and the Triangle Park Mural) in addition to five independent murals between NC and WV. In 2016 Molly decided to take...
a break from public art return to school to finish a long-abandoned bachelors degree at West Virginia University, and may continue to get an MFA. She is currently refining and growing her painting practice while also studying things she cares about, including precolonial and Native American history, neocolonialism, migration & human rights, solidarity economics, and collectivization. Molly is committed to participating in positive change in Appalachia.

What's the Value of an Outdoor Historical Mural?

"It's priceless," says Chris Joyell of the Asheville Design Center, (a non-profit where pros give their time to accomplish problem solving for towns and cities at the basic level.) "At one time 'The Block' (East End) area of Asheville was a thriving central business district for African Americans throughout the mountain area," he says. "Most all their needs were met there. The district thrived until the late 70's when Urban Development started changing...
small communities, moving families into public housing. Soon the local businesses weren't supported, for there was no density for businesses. We took a look at what could be done now, and part of what we came up with was a 270 feet linear outdoor historical mural("Triangle Park") to save the history of this remarkable part of Asheville. Along with saving history with the mural, the development of new affordable housing and visitor friendly hotels are now being added to the neighborhood."

We found a paid Vista Volunteer, public muralist Molly Must, and as lead artist she began an adventuresome journey into the history of East End, first hand. For nine months she spent time with the residents, ate dinner with them and looked at old photos. Finally she met with me and rolled out a 270 feet sketch of the mural. I was blown away!"