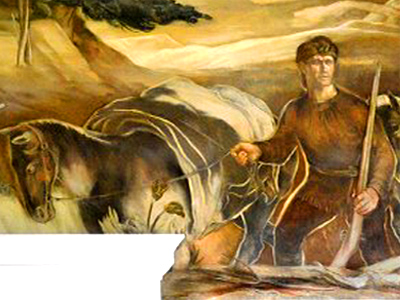 Inside the historic downtown Boone Post Office, the mural "Daniel Boone on a Hunting Trip" by the noted muralists, Alan Tompkins, depicts the town s famous namesake with locals who gaze with keen anticipation from the frontier to the wilderness. The mural was commissioned by the Federal Arts Project program in 1940 as a part of the New Deal Art movement. Through this program, art was chosen for a Post Office in each state through anonymous competitions sponsored by the Treasury Department. For the Boone Post Office, 1,475 designs were submitted and the average commission was $725. Life magazine published each state's winning mural with Boone representing the state of North Carolina. Recently restored in 2014 by David Goist, the mural is a source of pride for the town as it is the only surviving New Deal mural in northwest North Carolina.

Alan Tompkins(1907-2007) a prolific artist, he continued to paint into his 100th year and strongly desired one thing: to be remembered for his art. "I'm not a hobbyist, I'm not an educator," said Tompkins. "I want to be remembered as a painter."

Tompkins produced thousands of paintings, many showing the influence of Cubism and abstract art, during a long and productive career.

Tompkins was born in New Rochelle, NY, in 1907. He graduated from Columbia University in 1929; he graduated with a second degree in 1933 from the Yale Art School, where he studied mural painting. Alan taught at the John Herron Art School, Cooper Union and Columbia. He worked as a book illustrator and industrial designer. During the Depression years he won four national art competitions that resulted in commissions from the Works Progress Administration to create public works of art. The murals that he painted in those years can still be seen in post offices in North Carolina and Indiana.

Tompkins described the role of the painter in a book about his work, Alan Tompkins Painter, by Linda Powers Tomasso: "The world passes before my eyes. I grope for meanings, importances that can be expressed in art. Sometimes the meanings have only a graphic life, not a verbal life. That's okay - they do not need a verbal life - a verbal existence. Let them come, these revelations, as they will. But - capture them! That is the function of the painter."