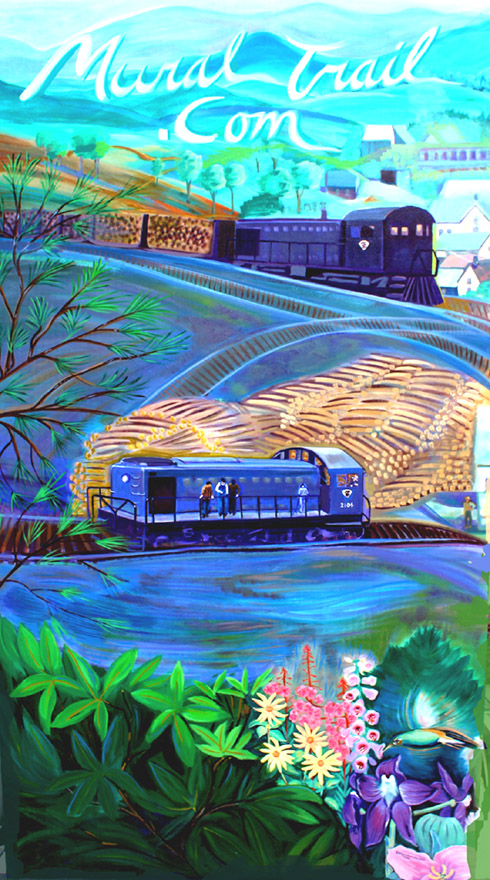 A Postage Stamp Mural painted by Doreyl Ammons Cain has been mounted on the exterior of the Canton Area Historical Museum.

The scene shows Champion Paper & Fibre Company's woodyard when trains delivered logs rather than chips to be processed into paper. Stacks of hewn trees were a familiar sight as were train cars laden with cut trees.

The engine in the center was inspired by a photo of a brand-new Champion diesel-electric switch engine on its first day on the job in 1947. "Champion was the first industry in western North Carolina to have such...
a modern locomotive, even predating the first Southern Railway diesels that would be permanently assigned to Asheville and the Murphy Branch," according to Gerald Ledford of Etowah, Canton native and co-author with Ron Sullivan of a series of books on logging railroads. Champion was justifiably proud of being the first in WNC to own one and had an official presentation and press release to showcase the engine, he said.

Built by American Locomotive Company for Champion in January 1947, the 660 - horsepower locomotive was painted gray with lettering and numbers in white. The Champion knight and shield were in color.

Surrounding mountains and a rural landscape are depicted in the background. Flowing shades of blue and green suggest the Pigeon River.

Native flowers and foliage along the mural base reflect a larger mural within the museum that was commissioned by the late Reuben B. Robertson and his wife Hope to decorate walls of the building constructed initially as Canton's Public Library.

"Shining a light on our rich Appalachian heritage through an outdoor historical mural trail near the Blue Ridge Parkway is the vision for the Appalachian Mural Trail Group," said Doreyl Ammons Cain, Muralist & Project Director. "Murals created by artists living in the towns and communities interpret mountain heritage."