AMT @ Dillsboro, NC
Dillsboro Mural has been removed from the Haywood Street Park location by the Town of Dillsboro due to new construction. Since no future home has been found for the mural, Doreyl has decided to sell the mural in small managable pieces that will easily fit on someone's wall space. This will be on first come basis, so reserve your piece of Dillsboro's history now. Email Doreyl here for the part of the mural you would like to own. 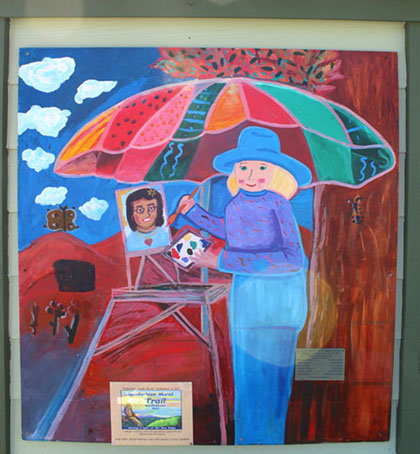 Featured Mural - "On Hallowed Ground Mural"  Downtown Dillsboro is most unusual. Very little has been written about it, so at first finding information about Dillsboro was difficult for mural artist, Doreyl Ammons Cain. Beginning in December 2012 with the help of George Frizzell, Head of Special Collections at the Hunter Library at Western Carolina University; Tyler B. Howe, Eastern Band of Cherokee Tribal Historic Preservation Specialist and Amy Ammons Garza, the story finally unraveled.

William Allen Dills was captured during the Civil War and was sent to prison in Camp Douglas Missouri. He found some books on numbers at the camp and studied about surveying. Once released he returned to Jackson County, where he became the county surveyor, met and married Alice Enloe. Together they built a home and farm overlooking Scotts Creek and the Tuckasegee River. In 1882 the first train into the area stopped on the Dills farm. So many people came that William laid out a whole town around where it stopped to service the visitors. The Jarrett House was the first hotel built and he laid out the rest of the town with streets and lots and established a mail line with covered wagons that traveled twenty one miles over a dirt road and Cowee Mountain to Franklin.

Meanwhile in the neighboring Eastern Band of Cherokee reservation, 3rd Principle Chief Nimrod Jarrett Smith (Tsaladihi.) was making great changes for the Cherokee as well. A well-educated and well-spoken man, he was fluent in both Cherokee and English. He was elected Principal Chief in 1880 upon the death of his immediate predecessor, Lloyd Welch. He exercised unprecedented power over and influence among the Eastern Cherokee working actively for official US.. government recognition for the band as a tribe under federal law and was successful. He was also chiefly responsible for the incorporation of the Eastern Band as a legal entity by the North Carolina legislature.

William Allen Dills, his wife Alice Enloe and Chief Nimrod Jarrett Smith are honored in this mural which has taken Doreyl Ammons Cain nine months to complete. A plaque honoring those who contributed was attached to the mural!
New Location: Coming Soon!
(Has been moved from Haywood Street Park)

Youth Mural - "Colorfest"   "ColorFest" Youth mural, painted during a youth mural painting workshop in Dillsboro, NC. The workshop was facilitated by Doreyl Ammons Cain to spotlight the young talent in Jackson County and to kick-off off the ColorFest fine arts festival in Dillsboro, NC in 2012. Participating in the mural workshop, these young folk did a great job actually painting this mural. These kids were ages 6 through 12 years old.
Location: 385 Haywood Rd (Downtown Dillsboro)


comment by: Marcie Toomey
This is our second visit to Holy Trinity.. we always leave blessed and humbled ❤️


Find the nearest mural to
your location(only NC and VA)
where you are right now or
where you might be in the future.
Type City only