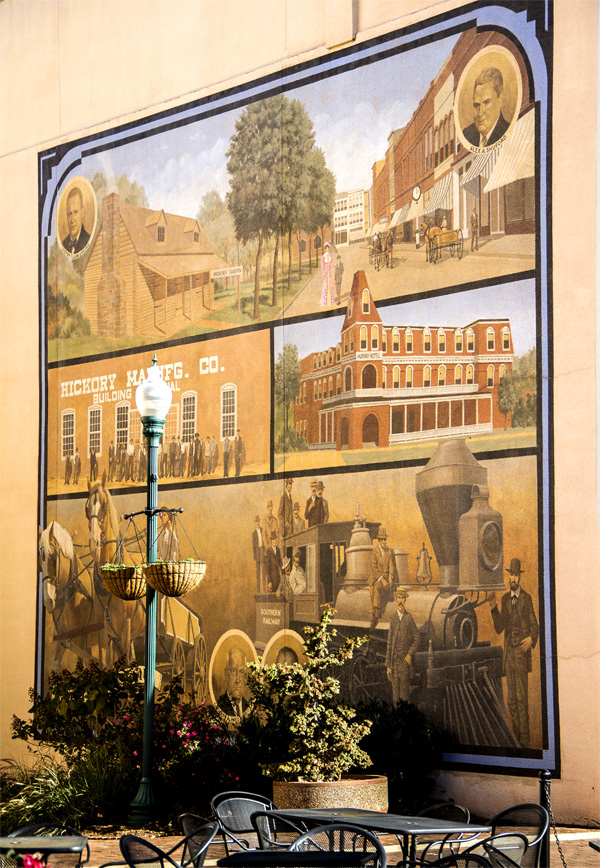 Historic Beginnings The 35 by 25 foot mural depicts the City of Hickory's historic beginnings. Included on the mural is the Piedmont Wagon, the Southern Railroad, Hickory Tavern, the Huffry Hotel, 1918 Union Square, and Hickory Manufacturing Company.

In addition to historic scenes of early industries, four pioneers who helped build Hickory's strong economic and community spirited foundation are included. The faces on the mural are Alex A. Shuford, J. Alfred Moretz, Lester Clark Gifford, and Edmund Thomas Moore, Sr. The mural was a project of the City of Hickory's Public Art Commission.
Mural Location: 234 Union Square

The mural painting was completed in September 2006 by Oregon artist Roger Cooke (1941-2012). During his lifetime, Cooke was sometimes called the "Johnny Appleseed of small town murals," having produced more than 60 historic murals across the country.


comment by: Tammy Compton
(Fort Myers, Florida)
Love it! We went looking to take selfies with 3 and found over 20 murals!