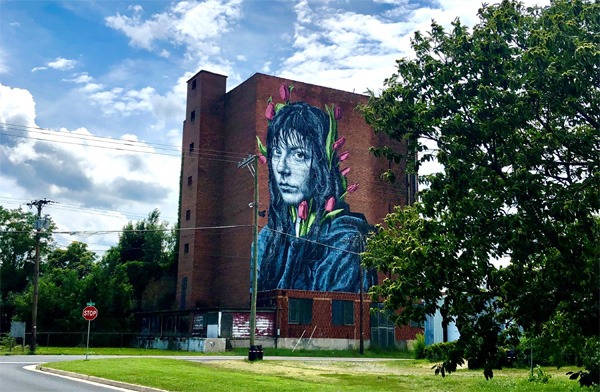 Featured Mural - "Kaiya"
(Mural shown above)
This mural was completed on the old Cassco Ice Plant building in Waynesboro in October 2019 in less than one week as a part of the VA Street Arts Festival. At seven stories and over 100 ft tall, this mural is the largest that artist Nils Westergard has ever completed. It was also voted #1 on the Top 100 Urban Art 2019 list by Streetart360.

Nils: "It was a massive challenge with 2 failing lifts that only got me half way through the wall, everything right of center was done with a pole. But it was a beautiful week in a beautiful part Virginia. The selfless hours and efforts of the many volunteers helped me over every hump, and I couldnt be more thankful to them for making all this happen."

There are nearly a dozen murals around town, all of which have been created as part of the annual Virginia Street Arts Festival that Waynesboro has hosted since 2015. Waynesboro has a page dedicated to Street Art on their website: Go Here
Location: 200 Race Avenue
Artist: Nils Westergard 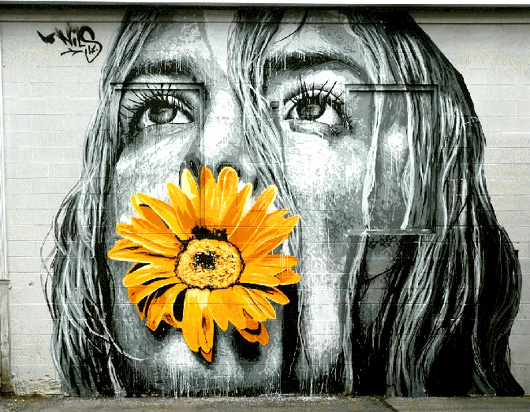 Description #1 - Isabelle
This mural was done by artist Nils Westergard as a part of the 2017 Street Arts Festival. "Isabelle" is painted on the back wall by the patio at Basic City Beer Co. Feel free to raise a glass and toast this lovely lady!
Location: 1010 E. Main Street
Artist: Nils Westergard 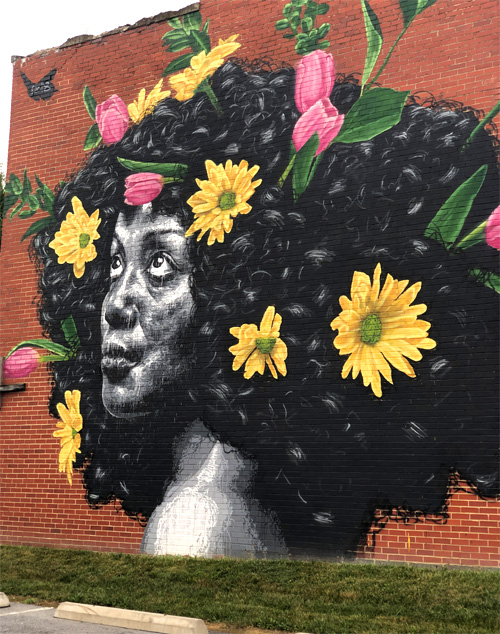 Description #2 - "Poochie"
This mural was painted on the building right next to the Wayne Theatre in Waynesboro, VA by artist Nils Westergard during the 2018 VA Street Arts Festival. "Poochie" looks up pensively toward the sky and has many colorful flowers in her hair. Another variation of Poochie can be found in Los Angelos, CA.
Location: 247 West Main Street
Artist: Nils Westergard 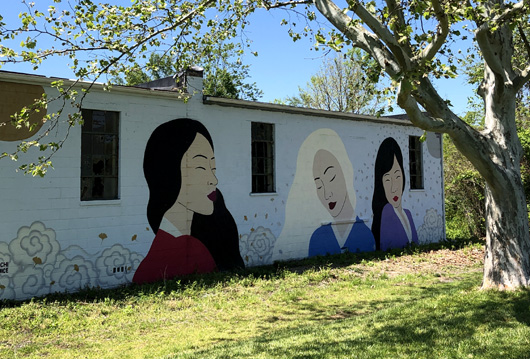 Description #3 - "Sun, Moon, & Stars Ladies"
This mural was completed by artist Julia Chon (AKA Kimchi Juice) as a part of the 2019 VA Street Arts Festival on a nearly abandoned building along Race Avenue in Waynesboro, VA.

Julia: "Inspired by a folktale my grandparents told me when I was younger about the creation of the sun, moon, and stars"
Location: 150 Race Avenue
Artist: Kimchi Juice

Description #4 - "Small Blue Ridge"
This mural was completed by artist Julia Chon (AKA Kimchi Juice) as a part of the VA Street Arts Festival in October 2018. It can be found around the corner on the back of the same building as Poochie, next to the Wayne Theatre in downtown Waynesboro, VA. This mural represents a smaller-scale Blue Ridge Mountains featuring some cute renditions of the wildlife that can be found in the mountains.
Location: 521 W. Main Street
Artist: Kimchi Juice

Nils Westergard is a creative mind and a nonstereotypical voice of his generation. This artist believes in contemporary themes but tends to lean on traditional values of friendship and honesty. He loves what he does and believes that only hard work will get one on the road of success. For him, success does not have to be all about a commission. It is the feeling one gets when he creates something that had been dwelling in the back of his mind. When the message gets out and people recognize it, that is where the true success comes forward. His Belgian grandfather was a painter, and when he was young he spent almost every summer in Europe, learning to welcome art into his life and express himself through a visual medium.

He is a Belgian-American street artist and film maker based out of Richmond, Virginia where he studied Film. Starting with stencils and graffiti as a teenager in the Washington DC suburbs he developed a unique style which has been translated to walls across the US, Europe, and Australia. His intricately cut stencils, hip-hop music videos, and large murals investigate topics of intimacy, ego, power, and fragility. Splitting his time between Richmond, Gent, and Amsterdam the young artist is establishing himself as a rising figure in the urban art world.