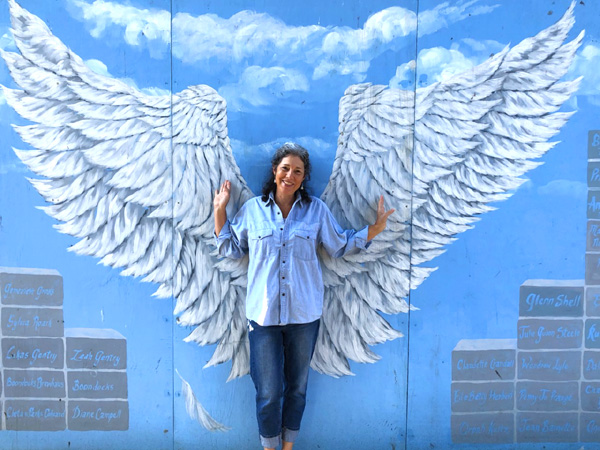 Featured Mural - "Angel Wall" After the night club disaster in Florida a friend shared a photo of angel wings that an artist had painted on a wall to represent the victims. She mentioned that I should do that in West Jefferson. I love angels. Who doesn't? I also love the interaction of people with the mural and the photos that people take are so interesting and varied... and touching sometimes too.

I had a wall in mind but the owner made a reference to "Victoria's Angels" and I knew that was not the right wall for this project. I spoke with another realtor but they had a hesitancy because of its symbology and then I rode by the Hotel Tavern and saw the perfect spot, and they heartily agreed. Customers enjoy taking turns photographing each other during dinner or just hanging out with friends having a drink.

It became a "Memorial" after someone called and asked if I would paint a block in honor or their mother, who had recently passed. I did not think twice and even offered the option up to others and that is how the wall was funded. We still get requests but ran out of room. Visitors can post their "Angel" shots on facebook...and scroll through to see all the other angels.
Location: 5 West Main Street
Mural Artist: Raney Rogers

Mural Mention#1 - "Poppy Mural" This was a mural that had circulated the web and I fell in love with it and was going to paint it on my gallery fence. However, as I was very busy I had not gotten the chance when I received a call from a real estate agency asking me to paint it on their business wall, which was quite large...65' (or so) by 19' and the largest that I had ever painted. I love the colors and the flowers just scream "We love being Poppies"! People tell me that it cheers them up when they drive by, especially on a gray, rainy day.
Location: 204 E. Main Street
Mural Artist: Raney Rogers 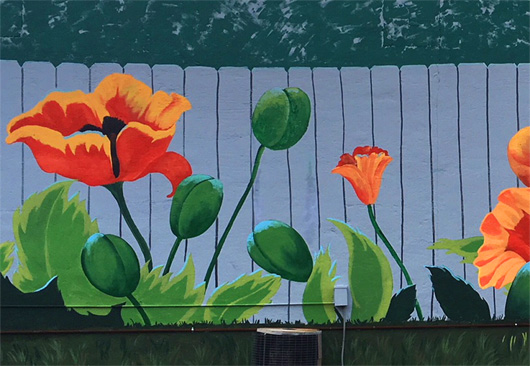 Raney Rogers  Raney Rogers has been a professional artist since 1981 after moving to Ashe County from Chapel Hill, NC. After teaching art for five years in the Ashe County Schools she branched off to pursue her painting career and her work now hangs in corporate and private collections throughout the U.S. and abroad. Raney pioneered West Jeffersons first fine art gallery featuring her own art - the Acorn Gallery - in 1992 directly across from the old burley tobacco warehouse.

Raney leads art sessions throughout the southeast and is currently an artist in residence in Kinston as well, where she has opened a new gallery and is creating a new body of work bringing her back to the nature scenes and wildlife she originally portrayed. She is also filming her televized show "Painting with Raney" where she exhibits her love of art and pulling others in to the creative experience with her unique method of guiding those who have never painted through their very first painting. Her first mural was the b ackdrop for her high school senior prom and she has since painted over many walls, indoor and out, to feed her love of large spaces and vivid colors. Raney believes that we are all artists, we just need to discover what that form of expression is.