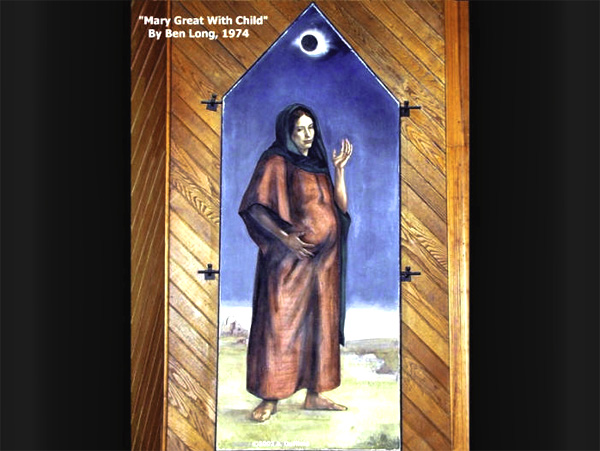 Featured Fresco - Mary Great with Child   The true fresco, Mary Great with Child, is housed in St. Mary's Episcopal Church in West Jefferson, NC. The church is located at 400 Beaver Creek School Rd and open 24/7 with an audio recording, available to visitors, gives information about the church and frescoes. Information is also available on the parish website; phc.diocesewnc.org and on the facebook site; the parish of the holy communion the churches of the frescoes.

The fresco depicts Mary, who has heard the voice of an angel telling her that she will bear a child who would be holy and would be called the Son of God. Now, as the time for birthing approaches, she raises her hand to say, "My heart sings out 'the Lord is Great' and my spirit is happy in God my deliverer". Over her head, hangs an eclipse of the sun, thought in the time of Christ, to be an omen of something enormously important about to happen: something that would change the world.

Mary Great with Child was painted in 1974. Ben Long was awarded the prestigious Leonardo da Vinci International Art Award in 1976 for this portrayal of Mary. The now well-known artist, Bo Bartlett, who was 19 at the time, assisted in the painting.
Muralist: Benjamin F. Long

Fresco Mention#1 - John the Baptist   John the Baptist, painted in 1976 was his second fresco. Mr. Long's image of John, standing on the bank of the River Jordan, is the fierce, wild man of the desert, draped in a hairy hide and wielding a big stick. John's eyes have the strange fire of one who has been a long time in the sun, eating bugs, and seeing things that most of us cannot see. His voice thunders prophecy: "Turn around! Turn your life, your hearts around! Yes, I wash you with the water for repentance, but HE is coming! So mighty that I'm not fit to carry his sandals! HE will cleanse you with the Holy Spirit and with fire! Get ready! Make his paths straight!"
Muralist: Benjamin F. Long

Fresco Mention#2 - Mystery of Faith   The Mystery of Faith, the third fresco, which fills the wall behind the altar, is a striking crucifixion/resurrection scene. In the foreground, hangs the crucified Jesus in stark, three-dimensional realism. Rising above and behind the crucified "King of the Jews" is "Christ the King" as a spiritual presence amid a background of clouds. Mr. Long painted the risen Christ as transcending any identifiable race or nationality.
Muralist: Benjamin F. Long 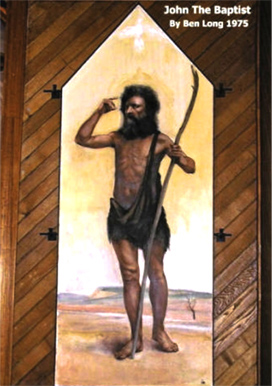 The Mystery of Faith Fresco Mention #2 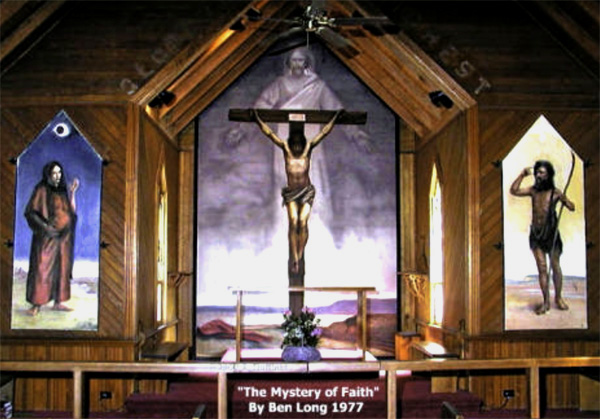 Benjamin F. Long IV was born in Victoria, TX in 1945 where his father, a fighter pilot in WW II, was stationed. His mother returned to their home in NC while Ben was still a baby. Reared in a family of artists, writers, professors, and university presidents, Long was as precocious in his artistic ability as he was eager to apply it. At 18, Long followed his father's footsteps to the University of North Carolina at Chapel Hill, where he majored in Creative Writing under the guidance of his friend and advisor Reynolds Price. Upon completing his University coursework and at the insistence of his advisor, Long moved to New York to immerse himself in the study of fine art.

In NYC, Long became a member of the Art Students League of New York, studying under the guidance of such notable artists as Robert Beverly Hale and Frank Mason. Then, in 1969, Long preempted the draft by enlisting in the U.S. Marine Corps. He served just over two tours of duty in Vietnam as a Marine Corps Combat Officer; during his last tour he served as Commander of the Combat Art Team, and much of his work from that period is now on display at the United Stated Marine Corps Museum.

Upon leaving Vietnam, Long traveled to Florence, Italy, to apprentice himself to internationally renowned Maestro Pietro Annigoni, with whom he learned the art of True Fresco. Long committed himself to Annigoni for almost nine years. His apprenticeship culminated in 1976, when he was awarded the prestigious Leonardo da Vinci International Art Award for his first fresco in the U.S. St. Mary Great With Child. This painting was followed by three other frescoes. All four of these frescoes were created in two Episcopal churches in Ashe County, NC.

In 1984, Long moved to France where, for the next 14 years, he split time between Paris and the Gard region of Provence. By that time, Long had completed several frescoes in Italy, including a joint fresco with Annigoni and the only work by a non-Italian at the Abbey of Montecassino. These works set the stage for 15 major fresco projects in the U.S. including a dome and the largest secular fresco in the United States.

In addition to his prolific fresco work, Long has had works in the Royal Academy as well as the Royal Portrait Society (London, UK). He has exhibited in Florence, London, Paris, Atlanta, San Francisco, New York, North Carolina, and South Carolina, and is represented in major collections throughout Europe and the Americas. He has lived and worked in Europe for over thirty years and now divides his time between Europe and the United States. He currently lives mainly in Asheville, NC where he has two art studios and an art school.